On the Trail with Mark Kayser

Memorial Day weekend is a distant memory, and although it was dreary in Wyoming, it was good to be home after a long week in Alberta. I needed the break. The black bear action was nonstop and the bears were bold at True North Outfitters. It was nice to unwind after the high-intensity daily meetings with black bears.

We knew we were in for a remote hunt when our destination landed us minutes from the border of the Northwest Territories. After the long drive and a short boat ride we landed in a relaxing tent camp that had all the amenities of home.

As I mentioned in a previous blog, I opted to hunt the bears on the ground to make it more exciting and to capture the intensity of seeing bears face to face on film. "Extreme Pursuits" Executive Producer Lonnie Garland was having second thoughts about the idea, especially toward the end of the hunt.

The bears were overly brazen and confident. Despite our best attempts to blend into the natural surroundings, their sixth sense brought them over to investigate our hides throughout the hunt. One evening a yearling tried repeatedly to crawl into the blind with us. After several meetings with less than 2 feet separating us, I finally "popped" the bear on the nose with my shooting sticks. I wanted it to steer clear before the nearby mama showed interest in the shenanigans. We were bluff charged the last night, and every night the bears "woofed" a warning at us to keep our distance. Keep in mind, all of this was happening at 10 yards or less. 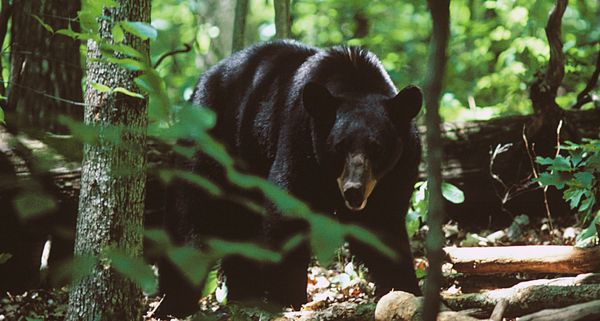 Since this area has a two-bear limit, I opted to start the hunt with my Thompson Center Triumph muzzleloader. The first night started out slow, but within an hour bears were silently circling in an attempt to check out the bait. I eyed one bear several times as it occasionally gave me a glimpse through the dense brush.

About a half hour later, Garland hissed at me that a bear was approaching. I couldn't see it due to a huge tree trunk blocking my view, but soon after a decent bear peeked from behind the bait. This bear was no pushover, and fled three times before finally committing to checking out the bait. That was my cue, so I sent a Hornady bullet on its way as the bear tore into the pile of goodies 10 yards away.

The bear tipped over less than 25 yards later, and I had the great start to an exciting episode of "Extreme Pursuits." But the hunt wasn't over yet. I had all week and lots more bear action to experience with my Mathews bow.